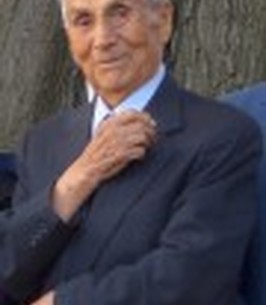 Armando Ramos, 90 of Ashburn, Virginia passed away on April 26, 2020. He was a resident at the Avalon House in Falls Church, Virginia for the last almost three months. He left this world peacefully in his sleep.
He was born to Eduardo Ramos and Emilia Salinas on October 9, 1929 in Oruro, Bolivia.
He married Petrona (Pepi) in 1948, who survives him. They shared the last 71 years together. Armando is also survived by son Tito Ramos and his wife Julie Rountrey, daughter Virginia (Vicky) Ramos Marketti and husband Michael Marketti, and daughter Johanna Ramos. Grandchildren: Jason Ramos and spouse Tracey Ramos, Nicole Ramos Botkin and spouse Chris Botkin, Leslie Ramos and partner Jay Langston, Michael Joseph Marketti and spouse Kristine Marketti, Julian Armando Marketti and spouse Amy Abadir Marketti and eight great-grandchildren. He is also survived by many family members in Northern Virginia as well as in La Paz, Bolivia from where Armando as a 36-year-old, his wife Pepi, son Tito and daughter Vicky took a quantum leap and immigrated to the United states in 1965. Daughter Johanna was born in the US and completed the Ramos clan. Armando was predeceased by parents Eduardo Ramos and Emilia Salinas, brothers Jorge Ramos and Valerio Ramos and sister Juana Ramos de Bedon.
As a young man and while working at the National Bank of Bolivia he played semi-professional soccer on weekends. He loved the sport!
He worked at Cafritz Hospital, for a few years in the late 60s and then retired from the Pan American Health Organization in 1991. Never one to be idle, after retirement he worked at Toys R Us, Target and then Wegman’s where he enjoyed meeting people and giving fresh bread samples! He enjoyed reading the paper from beginning to end; jogging up to 14 miles a week was also one of his passions.
A memorial service will be held in early Fall of 2020.
In lieu of flowers the family encourages those who wish, to make a donation to the Alzheimer Association ( ) or Capital Caring ( ) in Armando’s memory.