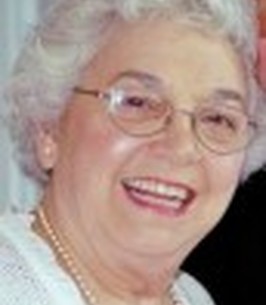 Betty Julian Whitt passed peacefully on Saturday, July 11, 2020. Born Betty Faye Julian on February 4, 1931 in Decatur, Alabama, she was the only daughter and firstborn child of Cecil Glendon Julian and Mary Ruth (Carter) Julian. She married Raymond O.D. Whitt, Jr., at the Ninth Street Methodist Church on June 10, 1952 in Decatur, Alabama. He preceded her in death on February 14, 2008 after 55 years of marriage.

Betty grew up in Decatur, graduated from Decatur High School in 1949, and took some college classes over the years to further her education. She was always proud of winning the American Legion Good Citizenship medal as a sophomore, and spent her life trying to be a good citizen, good neighbor, and friend to everyone she encountered.

Betty and Ray began their married life together in Atlanta, Georgia, where Ray started his 40-year career with Westinghouse Electric Corporation from 1951 through February 1962. Over the next five years, they were transferred to Lima, Ohio; St. Louis, Missouri; Monroeville, Pennsylvania; and Chicago, Illinois. They settled in Beaver, Pennsylvania in 1967, and remained there until retiring in December 1991 and moving back to Guntersville, Alabama the following year. They enjoyed life there until Ray’s accident in December 2006, and eventual passing in February 2008. In her later years, Betty lived with her daughter in Atlanta, Georgia, her son in Alexandria, Virginia, and then in assisted living facilities in the Alexandria, Virginia area.

Betty worked several times throughout the years, when not fully engaged with her children, and was most proud of her days as a legal secretary. She first worked during her junior year of high school at Grant’s Department Store on weekends, but her excellence in typing and shorthand dictation soon led her to a position in Decatur as a secretary at the Veteran’s Training program, and then to her first legal secretary position in the law firm of Joseph Calvin and James Bloodworth; Bloodworth later served as an Associate Justice of the Supreme Court of Alabama. When Ray Whitt returned from College one summer and called her for a date, it started a courtship that ended in their marriage and move to Atlanta in 1952. In Atlanta and Marietta, she worked for Life Insurance Company of Georgia, until they had their first child. Through their several moves, Betty focused on raising her children until again going back to work in Beaver, Pennsylvania at the law office of J. Lauson Cashdollar. She also tried her hand at selling real estate. Following their retirement, the Whitts returned to Alabama to reside near Lake Guntersville.

Betty will be remembered as a loving wife, friend, and mother. She had big brown eyes and a beautiful smile. She had a strong desire to do what’s right, which she tried to do for friends and family, and taught her children to do the same. Since childhood, she remained a member of the United Methodist Church and sought to follow God’s teaching. She was honored to be invited to participate in the Emmaus Walk. Betty was a genteel hostess with a servant’s heart.

Betty loved her family and focused most of her efforts on them. She was a gifted teacher and fostered a love of learning to her children and grandchildren. She also enjoyed history, politics, genealogy, a good book (especially mysteries and historical fiction), and gardening. Her home was always filled with flowers, gardenias were her favorite, and her vegetable gardens were prolific. No matter where she lived, she was very involved with friends and community, often in service or historical organizations, like the Welcome Wagon (served as president in Beaver), Fifth Wheel, hospital and nursing home auxiliaries, and garden clubs (served as president). One of her favorite organizations was the National Society, Daughters of the American Revolution, where she served as a Regent in two Chapters and Registrar. She also joined the Cub Scouts as Den Mother. Wherever she lived, Betty really enjoyed playing bridge and quickly located a bridge club in every new location. In Guntersville, Ray and Betty were involved in various groups associated with the Guntersville First United Methodist Church, the Historical Society and outreach efforts.

Betty enjoyed traveling with family on many vacations to beaches and mountains, and once across the entire United States. In later years, she was able to accompany her husband on business trips around the world and they enjoyed making the most of their timeshares. However, favorite visits always included their grandkids, and it was not uncommon for them to drive to Atlanta for a school event or youth baseball game!

In lieu of flowers, the family requests that any gifts be made to either Guntersville First United Methodist Church (539 Gunter Avenue, Guntersville, AL 35976) or the National Society, Daughters of the American Revolution (For more information, please contact the Office of Development at or (800) 449-1776.)