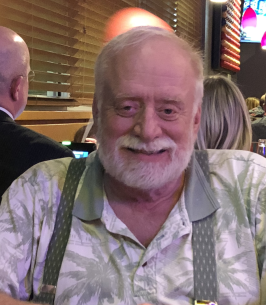 Clay, the oldest of four children, was born in Richmond Hill, New York and grew up in a sailing/scouting/dog-loving family on Long Island. He graduated from West Islip High School where he was active on the swim team, and later he worked as a lifeguard. At Purdue University, he joined Sigma Pi fraternity and earned an Industrial Engineering degree. Upon graduating, he began his career as a Commissioned Officer in the Navy, attending Navy Supply School in Athens, Georgia where he also got married. He served on a nuclear-powered Polaris fleet ballistic missile submarine, the USS Alexander Hamilton from 1969 – 1971. Clay’s service with the Navy took him from Annapolis, Maryland to Adak, Alaska and back to Orlando, Florida. Once retired from active duty, he moved his sailboat and family cross country to Issaquah, Washington and began his civil service career as an auditor for the United States Department of Health and Human Services. In 2005 he relocated from Seattle, Washington to Rockledge, Florida to attend to his mother following her stroke. In 2015, he relocated one last time to Arlington, Virginia to be closer to his daughter and grandsons (and his oldest daughter beginning in 2016).

In lieu of flowers, memorial contributions may be made to the charity of one’s choice. Services will be held at a later date at the convenience of the family