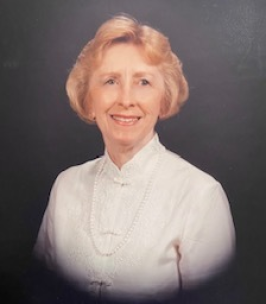 She relocated to Washington, DC as a single career woman after World War II and was employed by Capital Airlines at Washington National Airport. This is where she met her future husband, Bruce G. Styers. They had two children while living in Alexandria before the family moved to Hagerstown, MD in 1954. An avid reader, Dolores instilled a love of books in her children and took them to the library frequently. She was a guiding hand, always present for her daughter and son. She returned to the workforce as an employee at the Washington County Board of Education where she worked for almost two decades before retiring in 1984.

Dolores loved to travel. Backpacking with her daughter throughout Europe for a month was one of her favorite journeys. Another highlight was taking her sisters on a tour of Ireland to discover their ancestral country.

After retirement, Dolores and her husband lived in Albuquerque, NM and N. Myrtle Beach, SC. She took classes and learned to create beautiful stained glass objects. She enjoyed sewing and decorating each new home. Walking on the beach was a favorite pastime.

Dolores moved to Stephens City, VA a few years after her husband passed away so she could be closer to her children and a granddaughter with whom she shared a special bond. She was active in the Stephens City United Methodist Church where she formed lasting friendships. She researched and published a family genealogy, tracing her father’s roots in County Clare and Kilkenny in Ireland, and her mother’s in Scotland and Wales.

She relocated to a retirement community, Westminster at Lake Ridge, in 2010. She enjoyed making new friends and led an active lifestyle there. She was grateful that the community had resources available to allow her to stay in her apartment after she was diagnosed with pancreatic cancer. Always a Woman Warrior, she fought valiantly to live long enough to enjoy her 97th birthday and the birth of her great grandson on July 10, 2021.

Dolores loved Frank Sinatra’s rendition of the song “I did it my way” and took the words to heart. She led an extraordinary life, always charting her own course and living as independently as possible.

She was preceded in death by her parents; husband; siblings: Thelma Pascoe, Rita Pesognelli, Wilbert White, and Janet Tyler. Dolores is survived by her children: Janet White Roberson and Bruce Edward Styers (Judy); her granddaughter Megan Welsh Jennings (Matthew); and great grandson William Roberson Jennings. The family will hold a private celebration of Dolores’ life and scatter her ashes over a Pennsylvania mountaintop in accordance with her wishes.

Donations in her memory may be made to the Westminster Ingleside Foundation.

Funeral arrangements are in the care of the Northern Virginia Burial and Cremation Society, 811 Cameron Street, Alexandria, VA.