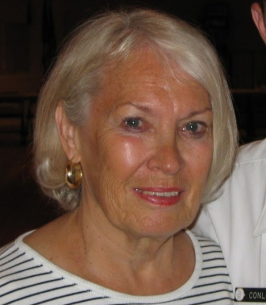 Helen, or “Marti” as she was known to her friends, passed away on June 7, 2021, at age 86. The Owatonna, Minnesota native lived in Northern Virginia since 1963, all but the past few years in Falls Church.

The second of four children, Marti dreamed of becoming a doctor. But while attending the University of Minnesota and working at the university hospital, she met a co-worker: Richard P. Conlon. They married and began raising a family, eventually moving to the Washington, D.C. area where Dick transitioned from journalism to a career on Capitol Hill.

A new chapter for Marti began when she lost Dick in a boating accident in 1988, after which she more deeply embraced life and increased her focus on family and friends.

She closely followed Washington’s professional sports teams, attending many hockey and football games with long-time friends. And although she was in her mid-50s, Marti complemented tennis by taking up competitive ice hockey, becoming the only woman on a local men’s team. That was capped off by learning to drive a Zamboni.

Marti had numerous circles of valued friends with whom she loved to socialize – including by playing bridge, dining out, going to the theatre or orchestra, and bowling. She enjoyed gathering with the families of her children’s in-laws, and she hosted many events at her home including for the Kiwanis, her widow/widower support group, and her tennis club. Marti delighted in wine and music, particularly jazz, sometimes joking that she wanted to return as a jazz singer.

Through the years she travelled extensively to visit friends and family across the nation, making frequent trips to the Outer Banks in particular. Her deep Minnesota roots never withered as she maintained close connections to her Owatonna high school classmates, joining them for annual reunions and other events.

Marti also travelled the globe to nearly 20 nations with friends and family. Two of her favorite trips were an African safari to view wildlife and a trip to Antarctica where she closely observed a penguin population. And she never lost her sense of adventure, traveling by camel in the dark to view the sunrise in the Sahara Desert – and riding a zipline through the jungle tree tops in Costa Rica when in her 70s!

Marti is preceded in death by her two brothers, Robert and Donald Martin. She is survived by her sister Carol Engelby of Arizona, as well as by her three children, Charles (Gina), Michael (Dale) and Kellie (Skip); by six grandchildren, Kelly (Michael), Christopher (Katelyn), Ryan (Sharon), Matthew (Alicia), Richard (Amanda) and Kaila; by seven great grandchildren (James, Audrey, Eleanor, Owen, Natalie, Amelia and Caleb); and by numerous nieces and nephews and their families.

Marti once wrote for a high school reunion that “My philosophy is to live each day to its fullest!” And that she did. She will be sorely missed by family and friends who loved her and who will always remember her spirit and energy.

A celebration of Marti’s life will be held in the future in conjunction with her inurnment at Arlington National Cemetery. In lieu of flowers or charitable donations, the family asks that you honor her passing by holding your own family and friends close, and by living your life to the fullest.