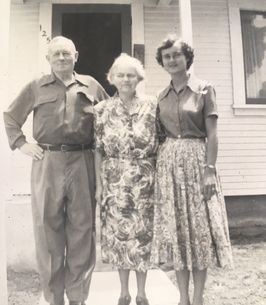 Irene Hartung – A Tribute by Her Family

Irene was born in National City, San Diego County, on October 12, 1929. Her parents were immigrants who arrived in the United States as teenagers. Her mother was born in Sweden and initially worked as an au pair in New York. Her father was born on the island of Bornholm, Denmark. After arriving in the United States, he traveled to Alaska to find his fortune during the gold rush there. He found adventure instead. Irene’s parents both eventually settled in California, met and married. Alice was their first child and was 12 years older than Irene. She and Irene had an extremely close and loving relationship that lasted throughout their lives. Irene would amusingly tell a story about the day her sister was married when Irene was six years old. At the end of the wedding reception, Alice and her husband drove away and Irene ran after the car in tears, crying “Good-bye, Alice”, suddenly fearing she would never see her big sister again. Of course, that didn’t happen. She and Alice traded weekly long distance phone calls for many years until Alice died. Irene then remained in touch with her dear nephews, Robert and Roger, until her death.

Irene grew up in a close and loving family. Their home was modest, and Irene said she never realized while growing up that they did not have luxuries. The San Diego of Irene’s youth was heaven to her. It had the best weather and most attractive beaches in the world and nothing bad ever happened there. Friends were extremely important to Irene. During her idyllic childhood, she developed close friendships with four girls who became her special group and would remain lifelong friends. Irene and Jane, her best friend whom she met in first grade, were especially close. Jane’s mother had an affection for Irene as well and referred to her as that “sweet little Irene”. It was a Hartung family joke, as with Jane’s family, that when Irene and Jane were catching up, the family telephone would not be available for hours.

After Irene graduated from high school, she attended San Diego State College for a year, graduated from Business College, and then worked at the U.S. Navy Base in San Diego. She had a boss at the base who would make a recommendation to her that would change her life. Irene wanted to travel and work overseas, but she did not have a path to follow. Her boss suggested the Foreign Service to her.

Irene was accepted by the Foreign Service as a secretary and traveled from California to Washington, D.C. for training at the age of 21. She would amusingly recount to Ken and her kids that during her trip a man asked her where she was going. She proudly responded “to Washington on business”. Irene would also tell the story with a laugh of her arrival in Washington, only knowing the perfect climate of San Diego. She didn’t know about the hot and humid weather in the D.C. area and arrived here in August wearing a wool suit. She quickly found her way to Woodworth and Lothrop and bought summer clothing.

Irene’s first assignment in the Foreign Service was to the American Embassy in Bonn. While walking along the Rhine River on a date, she met Ken who was also with someone else. They began dating shortly thereafter. Ken had been assigned to the embassy after enlisting in the U.S. Army at the beginning of the Korean War. As Ken has frequently said, he had a good aptitude test day in boot camp and he and two other recruits were subsequently pulled from their group of recruits who were all sent with the first wave of soldiers to Korea. Ken ended up working for the U.S. Army Security Agency in Bonn.

Irene and Ken were married on January 31, 1954 in Bad Godesburg, near Bonn, honeymooned in Berchtesgaden, and then began their adventurous life together. Irene resigned from the Foreign Service and Ken would later become a Foreign Service officer. Over the next several years, Jean, Fred and Rob were born. And over the next 18 years, they would live in Camp Zama, Japan; London; Phnom Penh; Genoa; and Vienna; and later in Rome. They made and kept many friends from these places, including Maggie, a good friend of more than 50 years from Vienna with whom the family is still close. During this time, they bought a house in Hollin Hills in Alexandria. The Hartungs were fortunate in that the Hicks family lived next door when they moved in. Remember, friends were extremely important to Irene. And she and Joan Hicks developed a close friendship that Irene valued for 53 years. In fact, Ken and Irene would follow Joan to the Greenspring Retirement Community in 2012, where they would become neighbors once again. They would join each other for dinner each night at Greenspring.

Irene was a loving wife and a caring mother. She supported Ken throughout his Foreign Service career, even when it required him to be separated from the family when he served in the Middle East. She gave her time to her children, from volunteering to oversee their school field trips to driving them and their friends to sports practices, games and other activities. She was a soccer mom before there were soccer moms. She stayed up late one night, with a severe cold and somewhat agitated, typing one of Jean’s junior high school reports the day before it was due. If not for Irene, Rob would never have become an Eagle Scout. She pushed (shoved) Rob to complete his Eagle Scout project before he departed for college and then drove the accompanying paperwork all over Northern Virginia to get it approved. She helped Fred get his applications to the U.S. Merchant Marine Academy and the U.S. Coast Guard Academy organized and submitted to their Congressman. Without Irene’s hard work, Fred might not have been offered an appointment to the Merchant Marine Academy.

Since her childhood, Irene loved going to the beach. She loved traveling to new places and to see friends, and she enjoyed going to museums and sightseeing. She liked dark chocolate and Grand Marnier. She had a good sense of humor and loved spending time with friends in small and large social gatherings. She loved to read. When her decreasing vision made reading less pleasurable, she enjoyed watching TV programs like Jeopardy and The Twilight Zone. And Irene was an avid cook and baker. The cookie jar was always full, which was greatly appreciated by the kids’ friends. One of Rob’s friends used to fondly refer to Irene as June Cleaver.

Irene treated everyone she met with respect and dignity and expected the same from others. She was a believer in the old adage “if you don’t have anything nice to say, don’t say anything at all”. She volunteered at Groveton High School to teach English to foreign-born students. She delivered meals on wheels to the less fortunate. And she organized friends to help take care of a former neighbor who had cancer and whose husband was not able to care for her during the day. These are but several examples of how Irene helped others with no expectation of anything in return. It came natural to her.

In her later years, Irene suffered from worsening chronic back pain and decreasing eyesight. She was in constant discomfort or pain. In 2020, Irene was diagnosed with cancer and had the option for treatment, but with a probable difficult recovery. Her mind was clear and strong, and she reviewed her options with doctors and family. After careful consideration, she decided she would make the decision on how she would leave this world. Irene chose to enter home hospice care. Irene told Ken and the kids that she didn’t want to leave them, but that she had lived a good and long life. Irene passed away on December 5, 2020, at the age of 91. She was the foundation of the Hartung family and Ken, Jean, Fred, Rob and Sarah miss her greatly.
Irene's funeral service will be held on October 12, 2021 at 11:00 at the Ft. Myer Old Post Chapel, followed by placement of her urn in the Arlington National Cemetery columbarium. Her family is not planning to have a gathering following the ceremony. Arlington National Cemetery advises that people who wish to attend the funeral service should arrive at the Ft Myer Hatfield Gate by 10:00 and must bring a current government-issued ID with a photo. The family suggests that those who might wish to contribute to a charity in her memory in lieu of flowers, choose the BrightFocus Foundation or the National Osteoporosis Foundation.