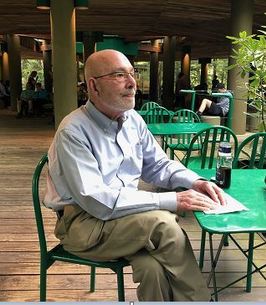 Marcus “Marc” Glenn Stauffer Jr., 72, passed away on Friday, March 19, 2021 at Georgetown University Hospital in Washington, DC. Marc grew up in White Oak, PA and lived in a few places before settling in Arlington, Virginia where he spent the majority of his years. Marc graduated from McKeesport Senior High School in McKeesport, Pennsylvania and his continued education included a bachelor’s degree from Bethany College, in Bethany, West Virginia, as well as a Master of Divinity from Colgate Rochester Crozer Divinity School in Rochester, New York, and Doctor of Theology from Emory University in Atlanta, Georgia. Marc was an avid reader, lover of genealogy, wildlife, conservation, LGBTQ+ rights, political science, and he loved his morning conversations with family and friends. Marc also loved animals, as he and his husband had numerous cats and dogs throughout their lives. Marc found joy in cuddling with pets, as they brought him comfort and companionship after the passing of his husband, Steve.

In the early years after earning his degrees, Marc served as an ordained minister for the United Church of Christ in western Pennsylvania. Between the mix of religion, politics and public scrutiny of people’s lifestyles in the late 1970s, Marc decided it was time to move on from ministering in a church. Marc then moved to Arlington, Virginia and made a career for himself in the circulation department at The Washington Post. He was a loyal and proud employee of “The Post,” where he retired after 19 years. He loved being part of a respected news company and remained a loyal reader throughout his life. After Marc retired from The Washington Post, he spent his second career of 17 years at the Department of Homeland Security, working as a senior human services analyst at FEMA. While at FEMA, Marc also volunteered on the diversity committee in a variety of roles. As a tireless advocate and member of the LGBTQ+ community, he was considered a subject matter expert in his field.

Throughout his life, Marc worked as an activist for the LGBTQ+ community, working to ensure equality, equity, and protections for those most vulnerable within the community. Marc and his husband Steve Patterson also made it a point to foster friendships with younger gay couples. They understood how family dynamics can be hurtful and damaging to people in their community. They were everything from surrogate parents, to role models, to resources on important aspects of life in the LGBTQ+ community. Marc also believed in the importance of people having someone to listen to them, a shoulder to cry on, or a pillar of support. While Marc no longer ministered for official church ceremonies, he continued serving. He performed quite a few marriages, but sadly spoke of the fact that the number of funerals he conducted outnumbered the marriages. Most of the funerals were for friends and their loved ones stemming from the AIDS crisis. Until the day he passed, Marc had many friends all over the world thanks to his caring and inquisitive personality.

Marc enjoyed nature and wildlife. He supported and worked with the Western Pennsylvania Conservancy to protect waterways throughout Pennsylvania and the greater east coast region. With his Friends of Fallingwater membership he visited the area as often as he could.

Marc was preceded in death by his parents Glenn and Cleona Stauffer, brother Harry Stauffer and sister in-law Yvonne, as well as his husband, Steve Patterson. He is survived by his nieces Jennifer Powel and her husband Dan, Dana Bagnoli and her husband Chris, as well as many beloved cousins, family, and friends all over the world. Those that knew Marc well also knew that when his husband Steve passed away in late 2016 it was traumatic for him. One of Marc’s most treasured friendships was the one he had with Marti Strohm. It started in the 3rd grade and they shared life’s ups and downs for the last 64 years. He also enjoyed 40+ years of friendship with Terry Boots. Among the many people that Marc and Steve connected with over the years was their friend Quentin O’Bryan, who is truly one-of-a-kind. The pandemic added many complications to our lives. Quentin was at Marc’s side speaking words of comfort as he passed. Marc’s nieces are especially grateful to Quentin for his friendship, caregiving, and personal sacrifices over the past few years.

Memorial donations in lieu of flowers can be made to the Western Pennsylvania Conservancy (https://waterlandlife.org/), an organization with a mission that Marc and Steve truly cherished.