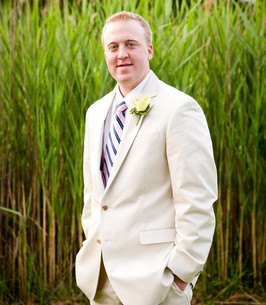 Ryan Michael Fisher, beloved son, brother, husband and father, lost his valiant battle with cancer on April 14, 2022, at home in Alexandria, VA. Ryan was born on November 21, 1982, in Takoma Park, MD. He attended DeMatha High School where he played basketball, soccer and golf and graduated from Sherwood High School as a member of the basketball team in 2001. He then went on to earn his Bachelor of Business Administration in 2005 from James Madison University and his Master of Business Administration from The University of Maryland in 2009.

Ryan is survived by his wife of nearly 11 years, Ashton (Bauersfeld) Fisher and their seven year old daughter, Larkin Fisher. He also leaves behind his parents, Steven and Dawn (Warholic) Fisher of Rock Hill, SC, his sister Kelley (Fisher) Hurtt, brother-in-law Jonathan Hurtt, and niece Juliana Hurtt, of Charlotte, NC, and his paternal grandmother, Julia (Bongart) Fisher, of Gaithersburg, MD. He is also survived by many loving aunts, uncles, and cousins.

Ryan was passionate about his work as a civilian employee at the Department of the Navy, beginning in 2006, and eventually worked his way up to management. Ryan met Ashton at work in 2006, and it was an immediate mutual infatuation. After their five year courtship, they married in 2011. With the birth of their daughter and move to a new house in “the countryside” of Alexandria in 2014, they fell into an idyllic family life.

Ryan loved sports of all kinds and excelled athletically throughout his life. As an adult, he was a skilled golfer who once considered joining the amateur tour, but instead continued to enjoy rounds locally with friends and family. Never one to brag, when asked how it went, he would just give a shrug and smile. Only later would his family come to find out he had won the tournament or shot an extremely rare hole-in-one. Ryan was a strong swimmer and loved being out on the water, as well as spending time at the beach and pool. He once caught the only fish on an offshore trip with friends, and on another occasion, swam the family’s 27’ sailboat to shore when the wind and motor both died. Ryan and Ashton enjoyed traveling the world in their younger days and had Larkin’s passport ready to go when COVID hit. The family instead focused their energy on continuing to make incredible memories traveling domestically. He was a fantastically laid back yet confident travel companion. Ryan loved open windows on a nice day and dining outdoors. He enjoyed eating all seafood (most of all MD crabs), spinach, sashimi, and could make a mean quiche. He enjoyed music, surprising everyone with a transition from Go-Go and hip hop to country jams. Ryan was an efficient and accomplished chef and sous chef at home, as well as a consummate host. Ryan especially loved giving his wife and daughter a hard time (all in good humor). Though he enjoyed so many things in his life, Ryan truly hated bugs, heights, and many vegetables.

Despite his large physical presence, Ryan was an unfailingly kind and gentle man, with a pleasantly wry and subtle sense of humor. Through his nearly five year battle, he was never angry or sad, just powered on and maintained his easygoing demeanor, so much so, that few people knew all that he was going through. He touched the lives of many people in his short time on this earth and leaves behind a multitude of cherished friends and family. To know Ryan was to love him.

Most of all, Ryan will be remembered as a phenomenal daddy and a wonderful husband. He always wanted to be a father and there was something about him that children were drawn to. His proudest life achievement was raising his daughter and he quietly endured his battle with cancer for so long to make sure he could continue being Larkin’s daddy for as long as humanly possible. Each hurdle was faced with resolve, as he drew strength and purpose from his role as a father and time with his little family. Ryan was not a man of many words but he spoke volumes through his love and devotion to his family and friends.

In lieu of flowers the family asks that you please consider donations to:
-The V Foundation (https://www.v.org/ways-to-give/cancer-research-donation-options/) or
-Larkin’s college fund (https://myaccount.virginia529.com/pls/prod/twpkwbis.P_wwwlogin?startpage=GIFT&key1=KBW0IND or https://www.virginia529.com/, Gift ID: KBW0IND).

Messages may also be submitted to the Northern Virginia Burial and Cremation Society (https://www.novacremate.com/obituaries) or Ever Loved (https://everloved.com/).

A Celebration of Life will be held in Ryan’s memory in the future, details to follow.