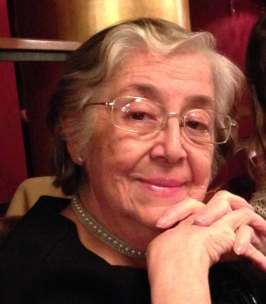 Sonia Vega Durbin passed away September 10, 2021 in Falls Church, VA. at the age of 87. She died peacefully at home with her family by her side, as she always wanted.

Sonia was born in Santiago, Chile on July 9, 1934 to parents Manuel Vega and Ana (Anita) Saenz. Her mother passed away suddenly when she was only 6 years old, and she was brought up by her father and maternal aunt, Isadora (Yoya) Saenz. They lived in Valparaiso for several years, where her father worked for the electric company. They eventually moved back to Santiago, where she graduated from the Universidad de Chile in 1958 with a Bachelor’s Degree in English. Sonia taught English privately, as well as in high schools in Ohio, and Northern Virginia Community College in Virginia.

While teaching was one of her loves, the other was cartooning, and she had quite the talent for it. She always managed to capture the comedic side of something, while still being kind and respectful, and was quick to recognize a cartoon opportunity. All of her friends, family, coworkers—and even her doctors—loved to get an original card from her.

She met her husband, James Durbin, in Ohio on one of several scholarships abroad, this one to the United States. He courted her during several trips to Chile to meet her family, and they married in 1958. They had two children, Ana (Anita) and Rodrigo (Joe), and settled in Virginia in the early 1970s, and was very proud to become a U.S. Citizen on June 20, 1977.

Sonia worked for the Fairfax County Government at Woodrow Wilson Library for over 20 years, and was deeply touched and honored to receive the Outstanding Performance Award in 1993. She retired in 1996.

She is survived by her children, Anita and Joe, her son-in-law, Evan Dosik, and grandchildren Michael and Sarah Dosik.

No burial services are planned at this time, but a mass will be held in her name at St. Anthony Catholic Church in Falls Church, VA.