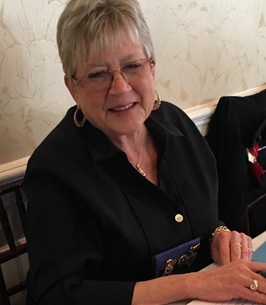 Susan Crupper Edson, beloved mother, daughter, sister, and friend to many, passed peacefully from this world to the next on April 8, 2022.

Springfield was a community Susan cherished. A longtime member of the Women’s Club of Springfield (General Federation of Women’s Clubs), Susan served multiple terms as president of the club and had the honor to serve as president during the club’s 50-year anniversary. Susan also contributed countless hours to the club’s thrift shop, from which the proceeds benefit academic and vocational scholarships for young adults.
Susan treasured her many friends local and afar. They were like a second family to her. At the start of the pandemic, Susan and some of her neighbors came together to support each other. That informal gathering developed into daily meetups to share stories about their lives and loved ones. Susan treasured the support and encouragement of her neighbors.

Susan worked as executive secretary to the president of the International Brotherhood of Painters and Allied Trades in Washington, D.C. In 2002, Susan began a new career as a legal secretary. After retiring in 2021, Susan devoted much time to volunteer work for the Women’s Club of Springfield.

Susan is survived by her nephew S. Chase Edson and his wife Jeannie, niece Tara Izzett and her husband Todd, and great-nephews and great-niece. Susan is also survived by her cousin Judith Shreve and her uncle Donald Mallorey. Susan was preceded in death by her parents and sister. Her son, C. Jeremy Edson, died in 2007. Susan was also preceded in death by her nephew J. Shepherd Edson and aunt Dorothy Mallorey.

Susan was an avid lover of pets, especially her rescue dog Cody. Contributions in memory of Susan may be made to the Friends of the Fairfax County (VA) Animal Shelter, Post Office Box 2321, Centreville, VA 20122.

A celebration of Susan’s life will be held at Westwood Baptist Church, 8200 Old Keene Mill Road, West Springfield, VA, at 1:00 p.m., on Saturday, May 7, 2022. Following the service, a time of fellowship will be shared at a light reception in the church hall. Inurnment will be private.